The following technologies were successfully developed and optimized by a team of young scientists of Dharamitra through project wise financial support received from Department of Science & Technology, Govt of India, New Delhi.

Using a special microbial consortium as well as cattle dung and urine slurry, a technique was developed for efficient and early decomposition of hardy biomass waste like cotton stalks, pigeon pea stalks, Lantana stalks and the like, which were otherwise difficult for decomposition due to the presence of high levels of lignin.

Dharamitra took up intensive trials on various methods for decomposition of water hyacinth, a problematic and an environmental hazardous weed; the technique was optimized for its conversion into good quality compost.

Enrichment of compost was tried with the help of bio-fertilizers like Azetobactor and Phosphorus solubilising microbes (PSM). The NADEP method of composting was also made more efficient and lower in cost.

Use of Organic Growth Promoters in Crop Trials

Many Organic Growth Promoters (OGPs) were developed as liquid manures by some of the innovative farmers and they were being successfully used in the field for a long time. These OGPs were developed by using cattle dung & urine as the basic ingredients and added with some other organic supplements. However, their scientific validation was missing. Dharamitra undertook trials to study the impact of some of these Organic Growth Promoters (OGPs) on the growth & yield of commonly grown crops in the region of Vidarbha like Soya bean, Cotton, Pigeon pea, Wheat & Chickpea. The OGPs tried under the field experiments were 5 variants of Sanjeevak besides Amritpani and Panchagawya. Microbial and enzymatic studies were also conducted to investigate the biochemical profile of these liquid manures. The study showed that by using only these organic manures, the yields of these crops could be enhanced from 23% to 48% when compared with the yields obtained under the treatment of chemical fertilisers.. 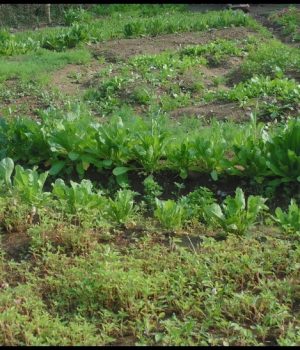 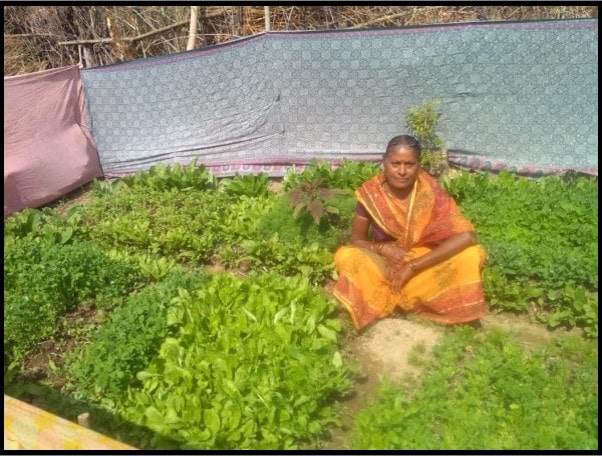 A special technique was developed for direct cultivation of vegetables on a bed of waste biomass, which in turn gets composted in situ. Another technique of ‘Organic Hydroponics’ was also developed to grow vegetables directly on sand-soil beds supplemented with nutritionally rich organic liquid manures like biogas slurry filtrate, cattle urine and Sanjeevak.

Studies were undertaken for the cultivation of selected aromatic plants like the Palmarosa and Lemongrass on semi-barren and poorly degraded land. The productivity trials on biomass yield and essential oil yield of these plants under various nutritional as well as irrigational treatments were conducted. A special attention was paid to the performance of these plants under rain-fed conditions and with organic inputs only and the performance was compared with the plants grown with chemical inputs and provided with external irrigation. The economics of the production was worked out. It was noted that Palmarosa could perform very well even under the harsh summer temperatures (44 – 460 C) of Vidarbha region  and was found to be economically more paying compared to cultivation of cotton (which is grown) when both the crops were raised under rain-fed condition. 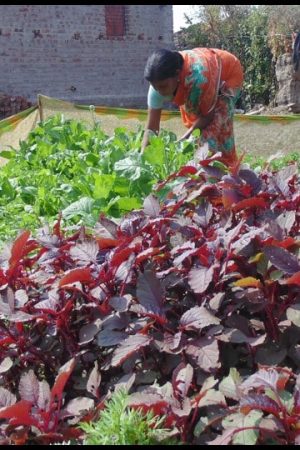 A simple and low cost device has been developed for contour marking that can be easily used even by the school dropouts in the villages. Another technique for raising contour bunds on the farms has been appropriately developed which uses bullock driven Keni, a large sized spade made of mild steel. These contour bunds are useful in arresting soil erosion over the steep land terrains and retaining soil moisture; as a result, the crop productivity on degraded land can increase manifold.

A rain water recharge pit has been designed to collect water running off over farming fields during monsoon season and to help recharging of the ground water. Such structure excavated in the ground at the lowest level of the farm is of the size of about 6 meter diameter and 3 meter depth. It can hold about 85 M3 of water that can be used for protective irrigation to protect crops that suffer from water stress in the course of long dry spells during monsoon. 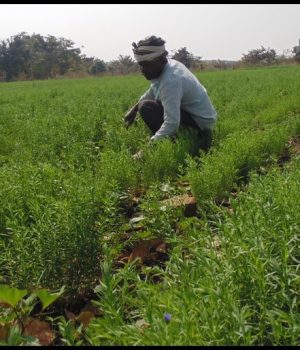 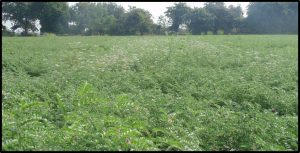 Based on ecological principles, sound traditional practices and experiences of some innovative farmers in the region, a package of agricultural practices comprising about 10 – 12 techniques and using locally available bio-resources has been developed as a substitute to chemical farming.

A simple, low cost and non-smoky steam cooker has been developed to cook foods like rice, dal and vegetables using a very little amount of charcoal. The cooker is easy to handle, time-saving and achieves substantial reduction in fuel cost.

A technique of briquetting has been optimised for locally available biomass like cotton stalks, pigeon pea stalks, groundnut shells and leaf litter. Under this technique, the biomass is charred in a closed drum, mixed with appropriate amount of sieved soil and converted into honeycombed blocks that are burnt in the slightly modified home Chulhas (cooking stoves). These briquettes form an alternative, low cost and non- smoky fuel.

A novel technique of lowering down of total solid content from the saline water with the help of leafy biomass of some trees was successfully developed under laboratory conditions. It would be useful for treatment of non-potable water as obtained in some saline water tracts or the one drawn from deep tube wells so as to make it suitable for drinking purpose.

Dharamitra has developed a low cost design of simple toilets that can be constructed by rural youths after few days’ training. Dharamitra also undertook trials on eco-management of night soil with the help of earthworms.

A very novel and eco-friendly technique was evolved to harvest honey from wild rock bee (Apis dorsata) colonies which are very ferocious in nature and consequently difficult to handle. Under this technique, honey is harvested without destroying the trees and disturbing the bees.

A sting proof dress was developed to ensure the safety of the honey hunter. Similarly, a low cost honey-processing unit was also fabricated to yield a good quality honey.

Paper and board from banana stem waste

A technique has been developed for production of fine paper as well as soft and hard boards from the pseudo-stems of banana plants which are usually discarded by the farmers as waste. The technology is simple, low cost and low energy intensive.  The boards have multiple utilities such as acoustic panels, expansion joints, door & window panels, insulating material, etc. The technique has wide scope of adoption in banana cultivated areas and it opens up new avenues of income generation for rural entrepreneurs through installation of small scale production units.